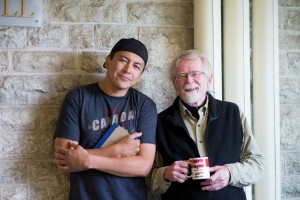 John Fox and Rupert Ross are used to seeing each other in the courtroom, not the classroom.

When Ross worked as the Assistant Crown Attorney for the District of Kenora, Fox encountered him during numerous bail hearings after being arrested for a variety of crimes, including assault and weapons charges.

The two reunited at the 2014 Canadian School of Peacebuilding (CSOP), this time on friendlier terms: Fox enrolled in Exploring Indigenous Justice and Healing, a course taught by Ross.

Between 1992 and 1995, Ross was seconded to the federal Aboriginal Justice Directorate. He travelled across Canada, examining Aboriginal approaches to justice with special emphasis on healing programs for victims, offenders, families, and communities.

He wrote two books as a result: Dancing with a Ghost: Exploring Indian Reality and Return to the Teachings: Exploring Aboriginal Justice.

Fox discovered the books as a student at Menno Simons College (MSC).

“I loved his books,” Fox said, adding that reading them gave him a better understanding of his Aboriginal heritage, the gap in communication between Aboriginal peoples and the dominant white Canadian society, and the history of violence in his family.

“I was hurt a lot as a child,” Fox said. “Because of that hurt, if you don’t deal with it properly, you tend to hurt other people.”

Fox grew up in Big Trout Lake First Nation, a fly-in community in northwestern Ontario. From the age of 11 to 15, he was sexually abused. He lost two close friends to suicide as a teenager, and turned to drugs and alcohol to deal with the pain.

Until a few years ago, he had spent most of his life working as a drug dealer. Fox was a violent person whose run-ins with the law led to nine or 10 stints in jail.

In 2008, his then-girlfriend’s sister committed suicide in front of him. Blaming Fox, the woman’s brother and boyfriend burned down his house.

After the suicide, things began to change for Fox. He stopped dealing drugs and started attending Alcoholics Anonymous. He began volunteering at a church drop-in centre and embarked on a healing journey that has relied heavily on traditional Aboriginal practices.

Today, Fox has been sober for four years and he is happily married.

Reuniting with Ross at the CSOP was a pleasure for Fox, and an indication of how far he has come.

“He’s such a storyteller,” Fox said of Ross. “He reminds me of an elder. Ask him a question and he doesn’t answer, he tells you a story.”

Fox may be enrolled in Conflict Resolution classes at MSC, but he says that what he’s really studying is the man he sees when he looks in the mirror.

“I’m studying myself, because I was a person with so much conflict.”