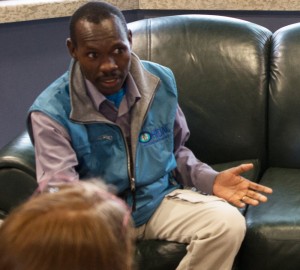 When Enole and Wazha Ditsheko wanted to start a peace centre in their hometown of Gaborone, Botswana, they thought studying at the Canadian School of Peacebuilding at Canadian Mennonite University would help.

So, the Ditshekos travelled from the capital city in the Southern Africa country to Winnipeg this past June to participate. The Ditshekos helped start their church, New Temple of the New Jerusalem, five years ago, and are leaders in that church today. They came to Winnipeg with Keseopile Gaselebalwe, who works with young people that their church helps.

Enole says New Temple of the New Jerusalem is a church that resulted out of conflict. The leaders of his former church were corrupt, leading promiscuous lifestyles and not being open about how they were spending money that parishioners were giving the church. They were not willing to be held accountable — financially, morally or otherwise, Enole says.

“African churches are made up predominantly of poor people,” he explains. “If they are going to put money in the basket, they should be able to ask at a general meeting, Where did that money go?”

The matter was brought to the courts, but the congregation and its leadership were not able to reconcile their differences.

“(The leaders) knew if they gave answers, they would be exposed,” Wazha says.

That conflict showed the Ditshekos that Gaborone could benefit from a peace centre — a place where people could learn practical skills for resolving conflicts without using violence.

In addition to conflicts caused by corrupt church leadership, the Ditshekos say a challenge facing Christians in Botswana is the influx of people from Zimbabwe who have come to Botswana to escape the harsh living conditions in their homeland.

“As local people, we often feel they have taken over,” Enole says. “But these people are desperate and want to make a living.”

The peace centre would help these Zimbabweans adjust to life in Botswana and aid them in getting the proper documentation they need to live and work in the country.

New Temple of the New Jerusalem also currently works with 30 youth between the ages of 10 and 19 who come from difficult home lives because they have lost one or both of their parents to HIV/AIDS. These youth struggle to maintain healthy relationships and get a proper education because they have no positive role models and live in poverty. Drug abuse amongst this group is rampant.

Gaselebalwe and her colleagues already work with these youth, bringing them to the church each weekend where they attend services, sing in a gospel choir and receive a meal. Within six months of connecting with the church, many of these youth have gone from living on the streets to living at home with their grandparents. Most are back in school after having dropped out.

“We find ourselves having to build the blocks of morality for them,” Enole says. “To do that, we feel a peace centre will be very helpful.”

Enole says that taking classes at CSOP was important to the group, and with any luck, he and other people from his church will be back in 2015.

“For as long as the CSOP is running, we want to send people here,” he says. “That is my desire. That is my dream.”