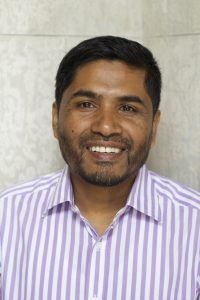 God has no flag

At a time when the fears and antipathies defining global politics revolve so closely around religious violence and conflict, peacebuilding that strives to unite religious groups is more relevant than ever. This year, one CSOP student in particular distinctively embodied such bridge-building passion:

Zahid Rohman is a practising Muslim. He holds a Master's degree in World Religions and Culture from the University of Dhaka in his home country of Bangladesh, and has studied intermittently at Eastern Mennonite University since 2012. This experience of Mennonites and anabaptism prompted him to pursue further exposure, contacting MCC Bangladesh where he learned about the CSOP:

“I came [to CSOP] partly to study the courses, but also to study Mennonites generally. According to my experiences, in the United States and now here, I have found Mennonites to be very generous, soft, gentle people. Their beliefs are very near my own in so many ways,” he says.

But such discoveries of fellow-feeling no longer surprise Rohman.  “There are many many ideas which, in my experience, are common—in agreement—between religions. God has no flag, no nation, no country. All of human kind are his creations and most all religions have common basic principles. The points of disagreement are often exaggerated or misinterpreted, and this leads to an artificial wall being built between people that is unnecessary.  The Quran teaches that humans are created for the welfare of other humans. If this is so, how can we continue as we are, divided? Only when we discard artificially inflamed barriers, walls, can we embrace the common truth that binds us together.”

From under the continual pile-up of negative media messaging vis-a-vis religious conflict, Rohman's ability to name division sown in falsehood for what it is, his words of hope and possibility, come as a welcome relief. This is an active habit of thought for him which, he says, found a name for the first time in his course with Dan Epp-Tiessen: “For me, the one most memorable thing from this course was the instructor's definition of hope. He told us, 'hope is not desire, nor expectation. Hope is an action.'”

In his working life, Rohman serves as the Assistant General Manager of the Bangladesh Institute of Health & Sciences [BHIS]; as a result, he deals daily with people who have suffered physical and/or psychological trauma, often due to the violence of prejudiced government systems discriminating between tribal and settler peoples. In his context, hope is a key occupational skill; Rohman says has been grateful for the unique professional development opportunity CSOP has been in this respect.

“I would recommend CSOP especially to those involved in helping professions” he says. “Health, social work, clergy, etc. For instance, I know there are at least 200 students enrolled in BIHS nursing programs right now, and every last one of them should take a CSOP course. However, I really think all people should know about CSOP regardless of profession, because it deals with real life issues that affect everybody in one way or another. For example, everyone has trauma, or they will be traumatized at some time, or they will know somebody close who has been. Furthermore, I think everyone should learn how to view stories—life stories, religious stories, etc.—through the lens of hope and healing, because this view can bring new life to those who take it. For those who choose to come, taking a CSOP course will change your life's vision. It will make you a more open person.”