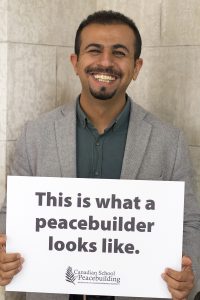 Dissatisfied with the work he was doing in his native Iraqi Kurdistan, Rebaz Mohammed moved 9,000 km to Canada last summer to work with Christian Peacemaker Teams’ Indigenous Peoples Solidarity group.

For Mohammed, who holds a PhD in law, the things he learned about Indigenous legal traditions was completely different from his background in Iraqi Kurdistan’s civil law system.

“I’m really enjoying (the course), especially since one of the facilitators is Indigenous,” Mohammed said during the middle of his week at the CSOP. “It’s not an outsider, but an insider who is giving us the course.

“I’m learning to rewire my brain to accept the fact that this is a whole different legal system that I need to be open (to).”

After graduating from university, Mohammed worked as a lawyer. Ultimately, he didn’t like the work, so he got a position with a human rights organization. He hoped that as an activist, he could make more of a difference than he could as a lawyer.

Working with the human rights organization was all right, but Mohammed didn’t appreciate the bureaucracy involved.

Joining CPT appealed to him because it would allow him to “work on the ground with people, instead of being on a policy-making level, and being disconnected from the reality of what is going on.”

“One other thing I liked about CPT is that it’s not neutral,” he adds.

“All the other organizations I was working with were neutral, trying to stay distant from (taking a side). CPT was clear in their writings that (what is happening to Indigenous peoples in Canada) is wrong, and we stand by this group to make it right.”

Iraqi law, Mohammed says, is a “weird mix of Islamic law and French law.” Meanwhile, Kurdish legal traditions were lost hundreds of years ago after the Kurds “became Islamicized and Arabicized.”

“I teach once every week at my alma mater, and I can’t wait to go back and tell them that there is a different legal system (they) didn’t know about,” Mohammed says. “It will be very interesting for my students to know what’s being done to revive (these old traditions).”