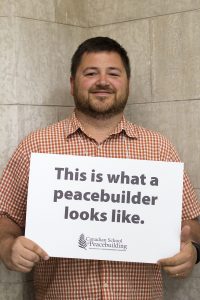 ‘The energy of people who are walking the talk of peacebuilding exists throughout this space,’ Joe Heikman says.

An ongoing interfaith dialogue that his church is having with a nearby Muslim community led Joe Heikman to the Canadian School of Peacebuilding (CSOP).

“They’ve invited us to their mosque, and we’ve had them to our church for a potluck and presentation,” Heikman said of some of the events his church and the nearby mosque have participated in together since first forming a friendship in mid-2016. “That’s been a really good thing, and I wanted some more language for how to engage in meaningful dialogue with the Islamic story.”

Heikman enjoyed the course, taught by Dr. Mohammad Shomali, founding director of the International Institute for Islamic Studies in Qom, Iran, and Dr. Harry Huebner, Professor Emeritus of Theology and Philosophy at CMU.

“It’s an amazing group of people to be a part of,” Heikman said, noting that the class was made up of people from five different continents, including people from different sects of Islam, different denominations of Christianity and one student with a secular Jewish background. “It’s just a real mix of perspectives.”

The CSOP often takes place during Ramadan, and organizers offer students who observe the annual month of fasting a food package that allows them to eat before dawn and after sunset.

Although he is not a Muslim, Heikman chose the Ramadan food package. There were two reasons for this decision.

“This is a course about common ground between Christianity and Islam, and fasting is part of both of our traditions,” he explained. “It’s something I could participate in that’s true to both tradiations. That’s half of it.

“The other half is that every good cultural tradition involves eating together. If the Muslim students aren’t eating at (regular) meal times, eating at 10:00 PM gives me a chance to (spend time with them).”

In a letter to Saskatoon’s StarPhoenix newspaper, published in June 2016, Heikman noted that “Christians have much to learn from our Muslim neighbours about Islam…, about the nature of faith and spirituality, and about ourselves as new friendships invite us to consider our own assumptions and ways of life.

“I’m also learning that we have much in common despite the differences between Christianity and Islam: shared values of love and peace, shared work in humanitarian aid, and shared visions of hope for our community.”

In that vein, Heikman was struck at the CSOP by Shomali’s teaching about the continuity between Judaism, Christianity and Islam as one ongoing story of the Abrahamic tradition.

It showed him that Jews, Christians, and Muslims are starting from the same place when engaging in interfaith dialogue.

“Where we end up is unclear,” Heikman said, “but we have common ground to begin with.”

He added that he was happy with his decision to study at the CSOP.

“The environment is what I hoped it would be,” Heikman said. “The energy of people who are walking the talk of peacebuilding exists throughout this space.”

“Participating in that is good for me,” he added. “It’s good for anyone interested in doing the work of peace.”