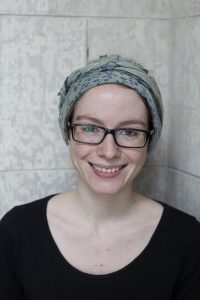 Sometimes, when you discover a good thing, one taste is just not enough. For Erin Yantzi, a third-year student at the University of Waterloo, transferable degree credit from a CSOP intensive was just too good not to come back for seconds.

The double Anthropology and Peace Studies major attended CSOP for the first time in 2013, when she took a course on Palestine that “really opened [her] eyes.” As a result she later interned for two months with Christian Peacemaker Teams in Hebron, Palestine, during the winter of 2015. She says that experience helped her see more clearly “where Christian conviction intersects with society and the individual” and propelled her to further formal study of peacemaking in action. “It made me want to better understand the complexities of various issues around the world and how we as peacemakers can equip ourselves, thoroughly and effectively for those unique issues,” she says.

This year, Yantzi enrolled in “Peace Skills Practice,” an applied peace-building course taught by Natasha Mohammed. She says that the top-notch instructors were one of the foremost reasons she returned to the School of Peacebuilding for a second season: “They really know their stuff and they're practitioners in the field so they can show us what the theories they're introducing actually look like in action. I was also drawn by the opportunity to meet so many different people here, who have all gathered over this common interest that they're very open about.”

Asked what her key take-aways from the course have been, Yantzi says it all comes down to a belief in human responsibility, or as she's come to understand it, “response-ability.”

“One thing I really liked was when Natasha said 'Conflict is not good or bad; it is either productive or destructive depending on how you respond to it.' We often think conflict is out of our control or out of human hands, but in reality humans create it, so humans can solve it—at least when the conflict is amongst humans, as opposed to conflicts with the natural world, like earthquakes, etc. We can choose to respond, and we can choose how to respond. Conflict starts to appear out of our control primarily when we stop thinking about the humans behind it. We don't like to think we have this much control because it's a lot of pressure, a lot of responsibility—but note the root word. 'Response.' Maybe we don't like our instinctive responses to conflict; we wish we didn't have to respond, that we could just hide from the problem or ignore it, but when we own up to the challenge and take responsibility for our power, hope opens up.”

Hope is a key word for Yantzi, as she considers how she would recommend CSOP. She feels the school proposes “more hopeful, trusting ways” of dealing with conflict than are common in everyday public discourse. “Take pacifism, for one example,” she offers, intimating that this conflict transformation tool is not often taken seriously outside of anabaptist circles. “I think I would recommend CSOP generally to people who have a lot of questions about themselves and how the world works, but beyond that, to people who want to be able to practice peace in daily life, who want to see peace grow in our world; especially anybody who is a fan of alternative perspectives on how to make change.”