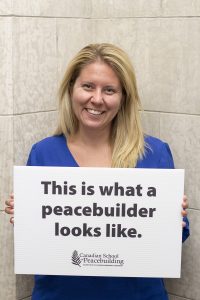 Growing up Ashley Hayward was told that she could do anything. It was a positive message, but an overwhelming one as well, with enough options and opportunities to get lost in.

She knew she had to find something that fit with her values. That’s how she found herself at CMU’s Menno Simons College (MSC), majoring in Conflict Resolution Studies.

As a working mother and a full-time student, Hayward also knows the value of practicality.

That’s what appealed to her about attending the 2017 Canadian School of Peacebuilding.

Hayward had just completed the Honours thesis for her undergraduate studies at MSC on how language shapes conflict and figured that studying at the CSOP would be a good bridge to her master’s training.

In her first week at the CSOP, Hayward took Journalism and Peacebuilding. She loved it.

“Communications theories are as important to relationships and to peacebuilding as the theory and practice of peacebuilding itself,” Hayward says “It’s critical.”

In her second week at the CSOP, Hayward—who is Métis—took Human Rights and Indigenous Legal Traditions.

She says she’s only just beginning to get to know her Indigenous heritage, and the course has helped her to do that.

Hayward adds that studying with people from a variety of backgrounds was a highlight of her CSOP experience.

“The international perspectives around the table and the actual experience from people around the world, from different walks of life, different parts of their careers, gave a different reference point for us,” she says.

She is the first person in her family to graduate from university.

“It showed me that my kids are picking up on what I’m doing,” she adds. “They’re being impacted by what I’m learning, even if they don’t realize.”