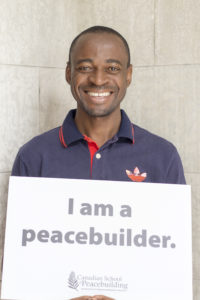 It was when Monday Adah Ogbe left his home country and flew across the ocean to attend the 2018 Canadian School of Peacebuilding (CSOP) that he connected with his roots.

Ogbe, 41, is a minister in a Catholic church in Nigeria and works with the non-governmental organization Pax Amor Initiative, which provides clothing and other material resources, health education, gender violence education, and conflict resolution in rural communities in northern Nigeria.

Recently, though, he asked for some time off to reflect on his life and get refreshed. He stumbled across the CSOP while doing a Google search for master’s programs and it quickly became part of his plan. “I just felt I needed peace building,” he says.

Peace has been an ongoing struggle in Ogbe’s life. As a Christian living in a Muslim area of Nigeria, he grew up amidst a lot of conflict. He and his family were attacked and had to flee twice because of Boko Haram, a jihadist terrorist organization. But it’s not just Boko Haram that is the problem. Religious clashes between Christians and Muslims happen time and time again, sometimes just starting from small issues. He says you never know when something little will turn into a crisis.

People are stuck in a cycle of trauma, but Ogbe says they don’t have resources in their community to help them deal with it. “Sometimes I think the church is the only resource where you go, you are consoled, you speak to somebody, you are prayed for. That is the only resource we have for healing trauma,” he says.

That’s why his CSOP class “Trauma, Peacebuilding, and Resilience – Level 1” with Vicki Enns, Clinical Director of the Crisis & Trauma Resource Institute, and Wendy Kroeker, Assistant Professor of Peace and Conflict Transformation Studies at CMU, was so meaningful. “I feel it’s going to be very relevant and useful for me,” he says.

Ogbe also took “Conflict and Development Issues in Indigenous Communities” with Tabitha Martens, an Indigenous rights activist and PhD student studying Indigenous Food Sovereignty. He says he’s going home with a new understanding of his own Indigenous roots and motivation to connect with his roots, where he finds his identity.

He says CSOP’s welcoming atmosphere of openness makes it easy to build friendships. “It was very profound, very deep,” he says. “If I had the opportunity, I’d take all the CSOP courses.”

Ogbe is currently studying for a Master of Arts in International Development Studies at Saint Mary’s University in Halifax, NS.