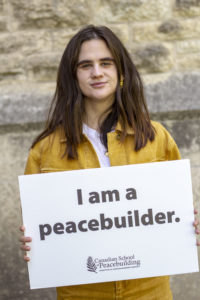 The CSOP Grows Community of Peacebuilders

“There are not a lot of opportunities like this in the world, where you can have people from all over the world who are all passionate about the same thing,” says Lisa-Marie Hasiuk. Like a lot of students at the Canadian School of Peacebuilding (CSOP), Hasiuk loves the community and the passion for peacebuilding that CSOP, now in its 11th year, brings.

A university student, Hasiuk is an International Development Studies major and has been studying for the last 11 years, due to switching majors. She first heard about CSOP three years ago and was excited to complete her first week of studies with CSOP just this past June.

CSOP sparked a passion for social justice in Hasiuk that she never knew she had. Specifically, it was the course titled “Who is my Neighbor? Ethics in a Bordered World”—taught by Roger Epp, Professor of Political Science at the University of Alberta—that had the biggest impact.

In the future, Hasiuk plans to work one-on-one with people in Indigenous communities. “I think that's where a lot of work needs to happen as opposed to policy change and it has to start at the grass roots,” she says.

She is planning for her future practicum with two people, Michael and Judie Bopp, that she met through the CSOP. “They're people who have done it all. They're doing a lot of work in Indigenous communities and I want to become involved.” Had it not been for the CSOP program, Hasiuk would not have discovered her passion for social justice, nor would she have met the Bopps and thus developed a network through which to pursue her calling to work with Indigenous communities.