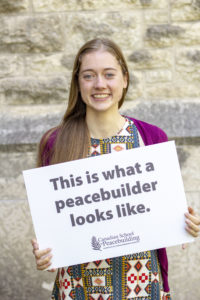 Carol McNaughton spent a semester in South Africa with Outtatown, Canadian Mennonite University’s (CMU) discipleship program, and has dedicated herself to peacebuilding ever since.

“I did Outtatown right after high school and that kind of sucked me into the Mennonite world I would say.” She began working at Camp Valaqua, a Mennonite camp in Alberta, and participated in Mennonite Central Committee (MCC) programs like Serving and Learning Together, where she spent a year in Cambodia. The 25-year-old now works full-time as the Peace Program Coordinator at MCC Alberta.

It was on Outtatown that McNaughton first heard about the Canadian School of Peacebuilding (CSOP). She took a course shortly afterwards and enjoyed it so much that she returned for more.

This past June she took the CSOP class “Who is my Neighbour? Ethics in a Bordered World” with Roger Epp, Professor of Political Science at the University of Alberta. “I’ve really enjoyed it,” she says. She’s excited to dig further into what they discussed, like the question of who your neighbour is and how to approach ethics if everyone is your neighbour, not just the person who lives next door.

“I chose this course because it felt like it was more out of my comfort zone in some ways … this one was more new to me,” says McNaughton, who has a degree from the University of Calgary in Social Work with a minor in Dance. It was also the themes of neighbours and borders that drew her to the course, as her trip to Israel Palestine two weeks earlier on an MCC learning tour had left the image of the wall cutting through Israel Palestine sharp in her memory.

McNaughton had visited once before, but as a tourist. “I spent most of my time in Israel, [I] hadn’t been to Palestine really,” she says. “It was intense both physically and emotionally to hear those stories but also energizing and inspiring to hear directly from people who are working toward peace and justice.”

A lot of things from the CSOP will stay with McNaughton, but one sticks out in particular. “People at CSOP come from all over the world. That is really the amazing thing about CSOP, is you meet up in a classroom with those different perspectives,” she says.

“Just having that inspiration of having a community of peacebuilders that, even when it doesn’t seem practical in some ways, are still committed that we have to keep caring and we have to keep working through these things to best love our neighbours.”